How To Get Paid To Bird-Dog Multifamily Deals 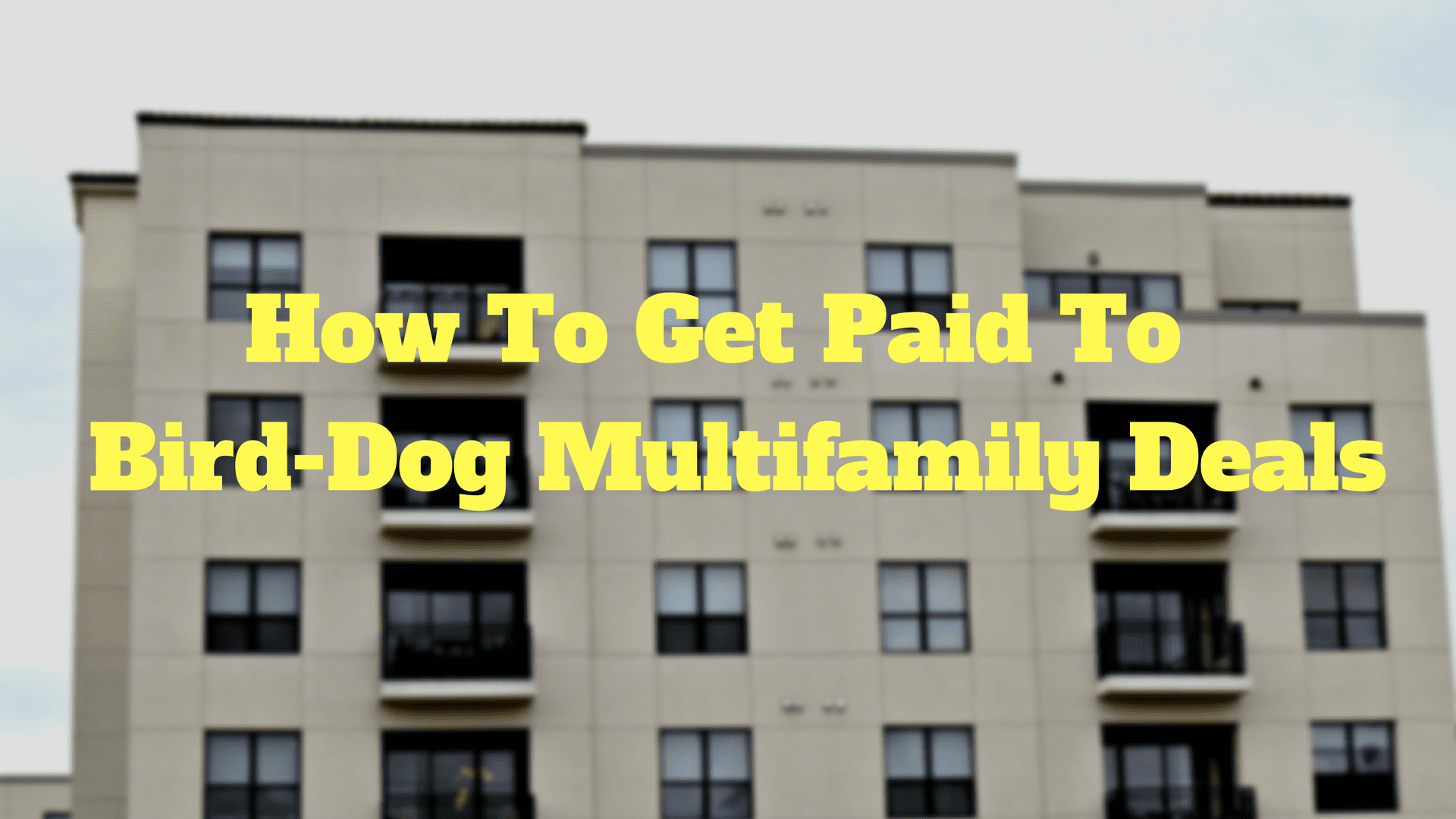 I believe multifamily investing is one of the best real estate strategies to achieve your financial goals because they generate passive income and long-term wealth. You might actually agree with that, but DON'T believe it's right for you.

Most investors think that because they don't have the money for a multifamily property they can't get started. My normal response to this objection is to raise money from others (and I write extensively about this here on my blog, see all of my articles here). However, there's an alternative:

Refer the deal to someone else (and get paid for it).

I had a student who brought me a deal in Columbus. He found it, analyzed it, and was getting close to a verbal agreement around a number that made sense. He then called me up, we determined that the deal was in fact going to work. We agreed on a $45,000 referral fee payable at closing, and I would take over from there.

This would let him say that he did a deal AND got paid $45K. Experience + getting paid. Very cool.

In an environment where deals are harder to come by, finding and pre-negotiating a deal HAS HUGE VALUE. That's something you can get paid for.

And it's not difficult to get started: you have to learn how to find deals and how to analyze them (I've written about both of these topics!). You don't necessarily have to learn about raising money, building a team, performing due diligence, or property management. You just have to get good at analyzing deals, which is a skill you can learn in a few weeks.

The Key To Referring Deals to Others

I have people email me like this: “Michael, attached is a 25-unit deal in Orlando. Let me know what you think”.

First of all, answering that question will take some time, and even if I WERE to answer the question, you have no CONTROL over this deal. All you're doing is sending me an unqualified lead of which there are hundreds.

Don't be that guy or gal.

NOW that the deal is qualified AND you have some kind of CONTROL over the deal, that's what makes working with you so valuable. You have an “in” with the broker or seller, something no one else has.

How YOU can refer deals to me

Here are the specifics step to refer deals to me:

You'll need some kind of spreadsheet to help you analyze deals. You can build your own or purchase mine! Check out the Syndicated Deal Analyzer (SDA), the most popular tool to help you analyze apartment building deals. It comes with 90 minutes of training videos to make you a master at analyzing deals. Learn more about the SDA here.

2. Get good at analyzing deals.

Once you have the Syndicated Deal Analyzer (or some other analysis spreadsheet), analyze 3-5 deals per week. Once your analyze about 15 deals, you'll find your confidence level sky rocket.

If you'd like to refer deals to me, you need to join the Deal Maker's Mastermind program (currently only $49 per month). This allows you to upload your completed SDA directly to me to get my feedback. You can also connect with dozens of other like-minded entrepreneurs, and it also qualifies you to send deals to me.

Get in the multifamily investing game!

If you're looking for a way to get into the apartment building investing game, bird-dogging or wholesaling deals might be a great way to go. You just need to get good at analyzing deals. Then refer deals that are properly underwritten and pre-negotiated. This is a skill you can get paid handsomely for, it's not terribly hard to learn, and it gets you started with multifamily investing.

If you have any questions for me (re: referring deals to me or any other inquiries) please leave your questions or comments below.

Here's to your success…