How Much Should I Invest to Acquire a Multifamily Investor?

Today, I am going to answer 2 key questions that you must know in order to scale your capital raising business:

We are going to go through, in detail, how to calculate the value of a new investor to your business AND how to execute a marketing plan to attract and acquire multifamily investors. It begins with the creation of a core platform through a single investment that pays for itself multiple times over.

After year 2, it has you investing over $22 Million in multifamily properties.

Don’t be scared by that large number! We are going to go through a lot of numbers and, you can follow along in this spreadsheet, which is the same one that I use to calculate my own plan for a 2-year life-cycle.

If you’re interested in answering these 2 important questions for your business, grab a pen and the spreadsheet and enjoy this video.

For the first scenario, we are going to work off of three assumptions.

Armed with that information, let's get right into the deal.

At this stage, you probably have a few deals under your belt and profit to show for it. You could start pumping money into a marketing platform now. Or, you can take the proceeds from your next deal to fund your marketing efforts and keep your investor pipeline full.

After the deal is done, the GP decides to invest 50% of that fee in to marketing. (By the way, this is an arbitrary number and just a suggested amount because you're still building a business.) Over time, that percent is going to go down, as you will see in subsequent deals.

Now, we're going to use that money entirely to build our core platform. At the end of this investment, we will have a lead magnet, the ability to capture those leads and then convert them into investors. $7,500 is what I am willing to invest in order to do that. 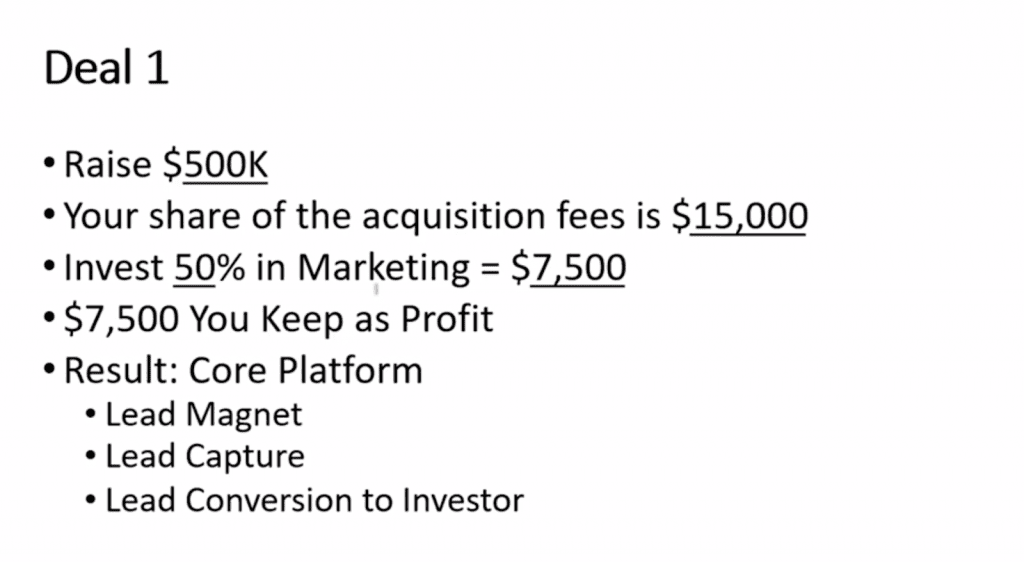 So let's see how this plays out…

Once you have the platform built, you're going to be a guest on 5 podcasts. Now, there's certainly other ways that you can (and will) generate leads. But I always suggest getting on other people's podcasts because it is such an efficient way to attract leads.

In speaking on 5 podcasts, you're going to generate 320 leads that download your free ebook, special report, or whatever you are offering.

Our experience, and industry-standard, shows that you can expect a 32 to 1 conversion ratio.  Meaning, that for every 32 people that download your lead magnet, 1 of them will become an investor. This means that the 320 leads that you generate will create 10 new investors. 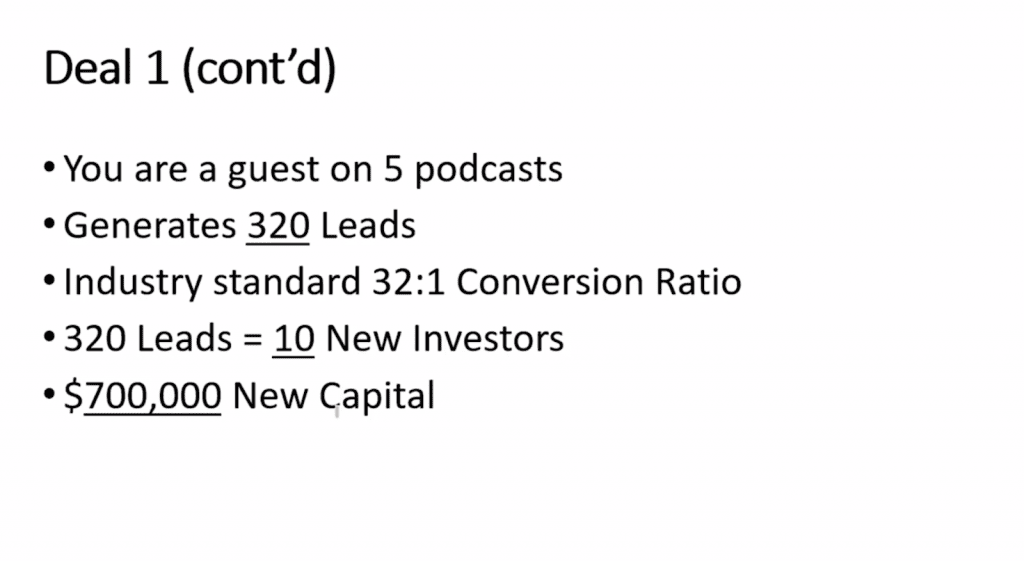 By the way, this isn’t counting repeat investment that you may earn from your previous investors, which is very likely!

Let’s run the same assumptions for Deal #2 as we did on Deal #1.

If you remember our earlier example, we invested $7,500. We're starting to create a new baseline because we now have our core platform built. This adjustment allows us to keep $15,750 as profit.

You might be asking – “if we already have the platform built, what are we going to do with this $5,250?” Let's check that out.

The first thing we're going to do is outsource our digital marketing efforts to an agency. They are going to handle the bulk of the content production. That means video editing, creating blogs, creating the emails, and putting it all out there on social media. It’s going to cost you about $3,000 a month to have a team execute that for you.

This is a fantastic investment that is worth every penny.

I'm going to use $3,000 for that team and content production, and spend the remaining $2,250 on paid Facebook ads (or some other mechanism) to generate leads. A lead is anyone who downloads my free report, etc.

Let’s say it costs me $5 per lead that I’ve generated on Facebook, which is a fairly high number. It's currently costing us $1.60 for my leads. Obviously a lot of that cost depends on how experienced your Facebook marketing manager is in the multifamily space, but I'm padding the example here at $5 a lead.

Do you see how this engine is starting to come alive? Let's do one more deal here before we show you the bigger picture. Here we go…

The acquisition fees go up to $29,000, and we are going to ratchet down our marketing investment to 20%. This cut is going to be our new baseline and we’re sticking with it. It’s a great way to continuously reinvest in your business in an effort to generate more capital.

Our profit margins are going up, and we still have nearly six grand to invest in marketing. We know we are going to spend $3,000 per month on the digital marketing team, and now we have $2,906 to spend on Facebook ads.

Using the same math, we can estimate to generate 581 leads, which is 18 new investors and $1.3 million in NEW capital.

Below is a spreadsheet that tracks the first year. In the examples above, we covered the first three deals.

You’ll repeat the same strategy for Deal #4, which will produce 18 new multifamily investors and a near $1.3 million capital raise.

Not bad for year one!

What’s really interesting is the momentum that we’ve built in this first year. Yes, we've had some success and established a track record in the multifamily space. And because of this track record, our profitability can go even higher.

How? Typically, as a sophisticated capital raiser, you're able to get better terms. Also, your Facebook advertising is going to get cheaper as your marketing team fine tunes the message and target audience. So then, let’s map out the second year.

The second year math is exactly the same here. We're reinvesting 20% of our gross acquisition fees back into our marketing. The number of multifamily investors we're creating keeps increasing and by the end of year 2, we'll have raised $22 million.

You can see that in an average month we are spending a considerable amount of money on marketing. We are also keeping over a half-million dollars for ourselves. I’d say that’s worth the investment, wouldn’t you?

If you look at established players in the multifamily space, they routinely raise $30-40 Million every single year. That puts a lot of food on the table. It creates jobs and they are serving their passive investors as well.

It all starts with building a core platform. Start by:

Don’t just take my word for it. Download the spreadsheet to create a plan that’s right for you.