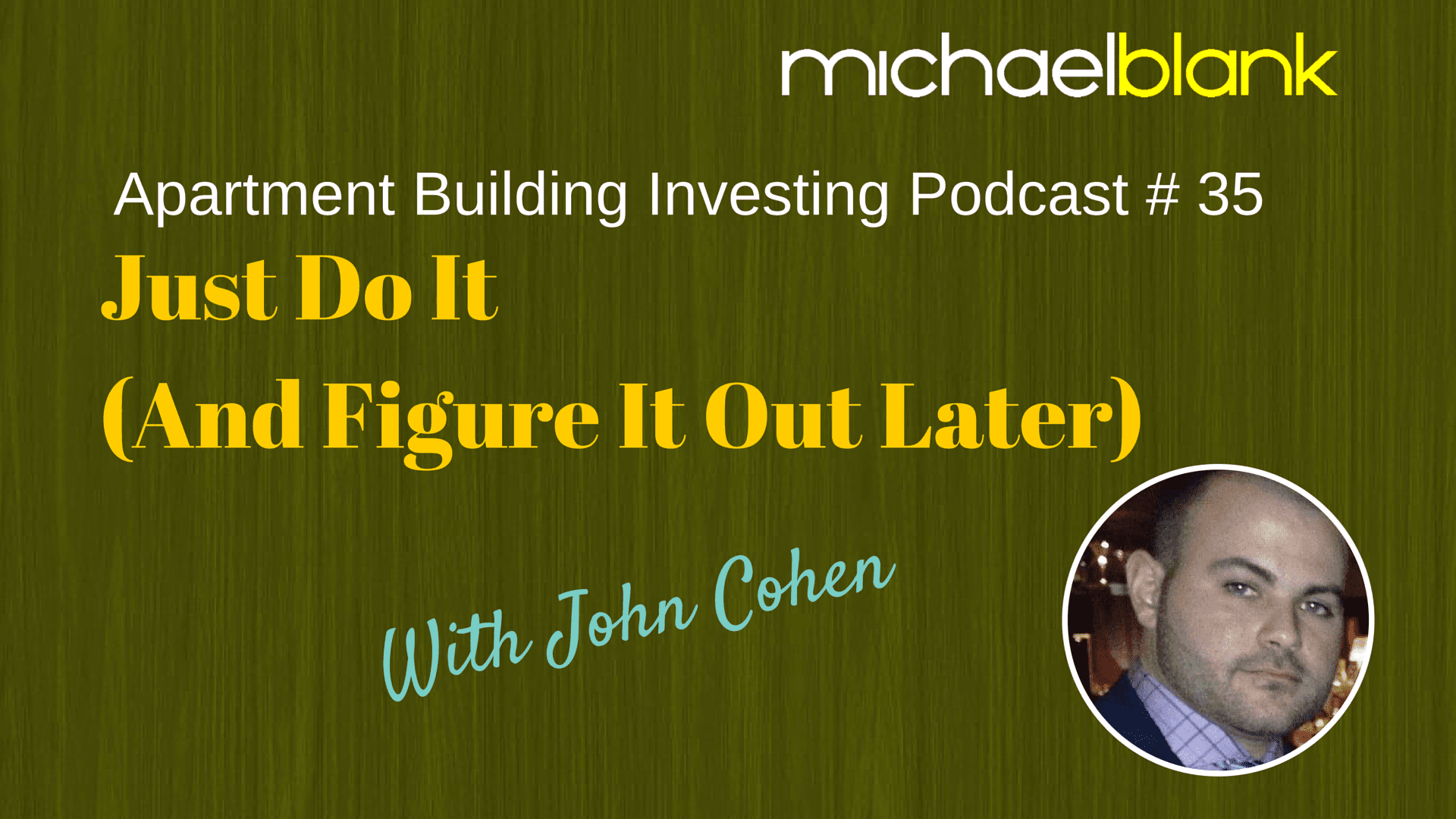 This week I’m joined by John Cohen who is just 29 years old and is the President of JC Property Group Inc., a company he formed in early 2013. John played college baseball and graduated with a degree in Economics from Queens College. Fresh out of college John started a job as a stockbroker at Morgan Stanley and quickly realized that it wasn’t the path for him.

He switched his focus to real estate and quickly found that making money on tax deed properties wasn’t as easy as he’d hoped. He joined Marcus & Millichap and became a successful commercial broker, all the while buying properties for himself, before leaving the company to focus 100% of his time on the growth of his company.

Listeners of this podcast know that I like ask people how they got their very first deal done. During this interview, John walks us through the events leading up to his first deal and how he got that first crucial deal done. His first deal was a 48 unit apartment complex in early 2015 and since then he has closed FIVE more deals!

John has many actionable strategies and tactics to finding and closing deals and he shares many of them in this interview.

[6:03] The moment John realized that finance wasn’t what he wanted to be doing.

[9:23] People say they want to become a millionaire and retire early, but they don’t really decide that’s what they are going to do.

[9:48] How John got into tax deeds without knowing what he was doing and purchased two worthless pieces of land.

[30:10] Strategies and tactics to finding deals.

[43:11] John’s biggest aha moment- Don’t take things for granted. You have to work for what you want.

Tell us about you and then about your business

I played baseball in college, I started in finance. I was a stock broker out of college. I realized I didn’t want to do that and had a passion for real estate. I read a couple of books, I was reading articles online, talking to people I know. My grandfather owned a bunch of properties. I came across some tax deed stuff and that appealed to me for some reason.

I didn’t realize it sooner because I didn’t take college seriously. Most kids go to college and do college things but they don’t take it seriously after the fact.
I graduated college, I moved home. My mom said I needed to get a job or move out. My mom showed me a job, I went to the interview. I realized I didn’t want to do that, when I was making 500-600 calls a day working 12 hours, raising money for some crazy idea for a stock. I sat next to my boss who was super successful, but I didn’t want to be like him at that age.

The defining moment was when I saw one of the guys there. He was over 80 years old, and I couldn’t see myself doing this til I’m 80. I wanted to make my own career. I walked in to my boss’ job and said I wouldn’t take the job, and so I left the training program.

My mom was my biggest supporters. I told her I’m going into RE, as an investor, and after she told me I was crazy she asked what she could do to help. The lesson is: don’t listen to the herd. I decided I was going to do it. Most people never do it.

How did you get started investing in real estate?

What I did next was to buy tax deeds. I bought a SFH when my brother graduated high school, and we rented it out to college kids. I had saved up some money. I attended the auction, but the opening bids were like $100, so I bid, I win a property for $300. Then I bought another one in case one didn’t turn out.

I had no idea what I was doing, but I figured it out as I went along. They gave me the deed. There was no address. It was just a lot. I drove there, it was a 10×10 lot, it was a worthless piece of land. The other piece of land was 100 feet long and 3 feet wide. Also worthless.

I then got my license and did rentals and sales in NY city and it went well and also listed some commercial property, I did that for 4 years. I was also continuing to buy tax deeds but with significantly more education. And I was doing well.

I actually saw my old boss and he said to me how did it turn out, and I told him I made more money doing this.

The tax deed strategy was to buy the deed, some had tenants in, I was able to collect rent. Some I flipped. Some were burnouts and they were almost a total loss. But overall I did well.

I wanted to collect passive income. I was trying to do different things. I thought a good first step was to become a CRE broker. I worked with Marcus & Millichap and I decided to focus on multifamily properties. But I was told it would take a good two years to make a living. I was thinking HUGE buildings, but my broker gave me smaller ones, like 4 or 6-units in Brooklyn. So I decided to give it a try. I figured I could make up for it in volume.
I envisioned myself flipping SFH or tax deeds. I watched a Webinar online and went to an event where they talk about all kinds of RE investing. There was a guy who talked about buying commercial buildings on a lease option. That's when I knew I needed to INVEST in multifamily myself, not just sell them.

I went home and did a direct mail campaign like I learned at M&M. Someone called me back on a 44-unit building in Cleveland, she never sold it to me. But that offer led me to a good family friend, and I was helping them with their SFH investing. I told them about this offer and they introduced me to someone who would end up being my mentor.

I knew a lot of the material but I learned a lot on the business side. I continued my direct mail and cold-calling. And I got a 48-unit deal in Columbus OH. The property manager kept all of my letters. He said the owner was horrible and the deal would make money. He set up a call with the seller. In 2015 I drove to Cleveland, made the offer and went back home.

How did you finance the deal?

My mentor really helped on the syndication side. Before I put it under contract, I had networked with friends and family. I then called everyone I know, I sent them the package, and actually ended up raising about $600K. I partnered with a balance sheet partner along with my dad and we all signed on the loan. It is a recourse loan but we got the loan even though we had no experience.

It was 70% occupied and only half the tenants were paying the rent. The seller originally bought the property for $1.65M, but our price was just over $1M. The manager didn’t have enough money to make repairs, there were a lot of deferred maintenance. It was chaos. We had 6 down units, all of the staircases had to be replaced because there were outstanding violations. There was a $200K tax lien that had to be taken care at closing. We renovated the units at turn, evicted and attracted a better kind of tenant, we renamed the property to make it a strong C+ asset.

We went to contract in April 2015, but we didn’t close until end of July. The seller did not have a sense of urgency. He was in Hawaii and a partner in South Korea. It was challenging, but we got it to work.

I was cold-calling and sending letters. Tracking deals systematically, following-up.

One deal was from a local wholesaler, one was from direct mail, two were off-market through a broker, and the other one had a government HAP contract on it, and it deterred a lot of buyers. It was SC, my property manager brought me that deal. I would tell people to focus on relationships. Brokers are good: build the relationship, follow-up, communicate, explain your underwriting. It’s a mix.

I started with listsource.com to get a list of multifamily owners. I did a lot of it myself. Now I use a 3rd party. I use Costar – way better than loopnet. You can also pull addresses. ProspectNow is another one. And another is PropertyShark, that works in NY better. It’s not what you write, but it’s the consistency, if you do it for 12 months and you send them out every month. That works significantly better. The owners will keep your letters.

What about Cold Calling?

M&M taught me how to find owner’s information. Costar has this information. If you find a broker friend, he could get access to it. I use Lexis Nexis, I have access to that, but it’s a little expensive. You can also use skip-tracing services. If you’re local, go knock on doors. The tenant might have the property manager's or the owner’s number. Consistency is key. They’ll tell you NO a 100 times but one day they might not. Ask for the phone number. Get used to the word NO.

What are you most excited about right now?

My syndication investing business. I’ve found a niche in the $5M – $15M space in NC. I’m really excited about the offers I have out, and the new relationship with new equity sources. Really building those relationships.

I’m also excited about a new “done for you” platform where I put together deals for people who want to do apt building deals.

Talk about a time you failed.

I’ve failed a lot! I was in 2nd grade, and my friend’s mom asked me what you wanted to do when I grew up. I said I wanted to play for the NY Yankees and she said that was impossible. I didn’t get there but it taught me a work ethic. If I had succeeded I wouldn’t be in this position. Same thing with the stock broker job.

Talk about any kind of “aha” moment you had, and how that impacted your life?

The biggest aha moment when I played in 9th grade in varsity, I fractured my lower back. At any time, you can’t take anything for granted, and it can be taken away at any time.

Imagine if you could travel back in time and have a conversation with your younger self. What would you tell yourself?

I would have taken education more seriously, I would have read more books. And (2) I would tell myself to work harder than anyone else. And (3) you don’t know everything.

What’s a Personal habit that contributes to your success?

I’m an early riser. Getting your hardest task done earlier will help you achieve your goals faster. Write down stuff to keep you organized and write down stuff so you don’t forget.

Not really. The biggest resource is my cell phone.

How to find you?

My cell phone or email. I’d be happy to hear from you.

Where there’s a will there’s a way. Don’t let you network hold you down. You can do it. Find people who can help you. You just have to find that person and don’t stop until you do. Work harder.