You’re Under Contract But Don’t Have The Money Raised – Now What? 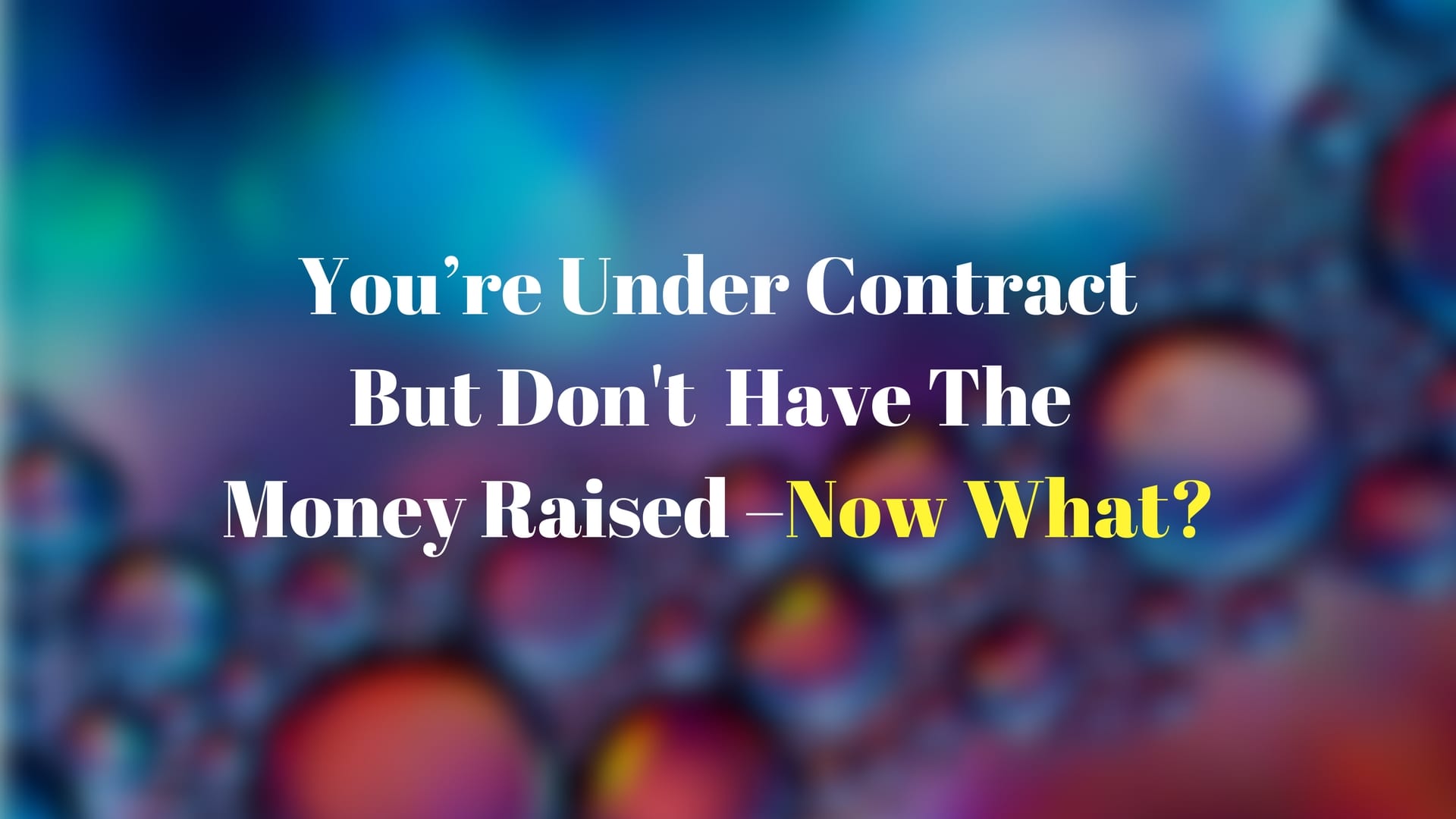 You managed to get a killer multifamily deal under contract but don’t have all of the money raised – what to do?

This “fear of success” keeps many newbie multifamily investors on the sidelines. They’ve been looking for deals while trying to raise money from private individuals. They come across a good deal but don’t have all of the funds committed yet.

And so they STOP pursuing the deal.

Reason # 1: They under-estimate the value a good underwritten and pre-negotiated deal.

Especially these days, finding good multifamily deals is tough. So when you have a deal that you have at least verbal agreement from the seller on a number that makes sense after rigorous and conservative underwriting, you have something of value.

Even if you DON’T end up closing on the deal, there will be a LONG line of people who would die to get their hands on a deal like that.

Reason # 2: You should always walk through open doors until they close

In my 11 years of being a full-time entrepreneur, I have learned that the universe gives you opportunities all the time. Many times we don’t see them or, more frequently, we fail to take advantage of them because we’re afraid.

I have found that when we walk through the open door presented to us, magical things happen that we never thought possible.

Therefore, it’s a new rule for me, that if a door opens that is aligned with your purpose and goals, that you should keep walking through the door until it’s permanently closed. Don’t give up until then.

Sometimes we fail to do something because we’re afraid of what COULD happen.

Even if the likelihood of that happening is remote.

One exercise I like to do when I’m afraid is to write down all of the “bad” things that could happen. I find that once I see them on paper, they don’t seem that bad, and my fear becomes manageable to the point where I can continue to take action.

Let’s do that exercise for this particular situation.

Let’s assume you found a 15-unit apartment building, analyzed it and made an offer. The seller countered, you sharpened your pencil and continued to negotiate a price works.

It's actually a smokin’ hot deal.

Let’s further assume that you chose to continue walking through the open door. You decide to submit a letter of intent.

In the time it takes to negotiate and sign the letter of intent, you have 3-5 extra days to call potential investors.

You also decide to work on Plan B, which is to call other potential investors who might be interested in buying this deal from you. You could either partner with them, refer the deal to them or wholesale the deal to them.

You call brokers, property managers and other professionals who might be able to put you in touch with owners of similar buildings. Network at your local REIA or on sites like the Bigger Pockets to look for people who already own multifamily buildings like this.

You get the letter of intent signed. You now have 7 business days to submit a purchase contract. Getting the contract ratified takes another 5 days. You now have an extra two weeks to raise money or find another buyer or partner.

Now you have 21 days to complete due diligence. This gives you at least an extra two weeks to raise the money or find another buyer.

Since submitting the LOI, you've had almost an entire month to raise the extra money or to find someone else who would assume the contract. This is probably more time than you realized!

You have a good deal and plenty of people are either looking for somewhere to put their cash or to buy a multifamily building that has been hard to find.

Worst case, if despite all of these efforts you FAIL to raise the money or find a single person who wants the deal you’ve delivered to them on a silver platter, you can always exercise the due diligence termination clause in your contract.

If you construct your contract correctly, you can terminate the contract for ANY reason before the due diligence period expires.

(While you can exercise this clause for ANY reason whatsoever, I would caution you to either have a GOOD reason or at least try to preserve the respect of the broker. Otherwise you will quickly develop the reputation for “not closing” and wasting everyone’s time).

Once we complete this “worst case” exercise, we realize that there’s a good chance you’ll actually raise the money.

But if you don’t, then it’s even more likely that you’ll find another buyer or partner who would die to take this deal off your hands and add it to their portfolio.

And in the off-chance neither of these materialize, you can exercise your contract termination clause.

And lesson # 2 is to keep moving forward through open doors until they’re permanently shut. I have found time and again that magical things happen when you do …